So Christian has been to Houston twice in the past 10 days - Tuesday through Saturday last week and then yesterday he and I flew over for a one day trip.
The news coming out so far has been positive. There was a flurry of tests performed last week and one which was "delayed" until yesterday because we needed some additional time to prepare for it.

One concern going in was that, due to his previous transplant in 1998, Christian's body might have developed scar tissue in the area where a new kidney would be placed. This could have been a minor issue to deal with during surgery or it could have been bad enough to prevent a new transplant. The good news is that he is in good condition internally for a new kidney.


The other concern was bladder function, since his has been unused for so many years. That is the test that got delayed and when we completed it yesterday, the news was great - his bladder is small (an expected result), but looks good and functioned well in the test. Post-transplant, it would be expected to grow to normal function once it starts getting used again.

From there we visited with our child life coordinator and discussed all of the things a transplant means; the amount of time in the hospital, the couple months post-transplant stay in Houston (we'll be outpatients 4 days a week as they draw labs, follow up and tweak his daily anti-rejection drug levels), the critical-ness of strong routines on taking daily meds, what happens if that schedule is not followed, etc. It's alot of information for a teenager to take in, but this will be his responsibility as he moves from high school into college and young adulthood.
And so normally things move like clockwork at TCH as this is a well-coordinated schedule and their trains pretty much run on time there. Thus we rush through the different clinic visits back and forth between two medical towers.... until the last one of the day. Reviewing the urology results was scheduled to start at 4pm. We had been told it would take 30-45 minutes. Our flight back to New Orleans was at 6:45pm. Everything's cool.

Well we arrived at 3:50, got checked in and then waited. And waited. Now I should make a side note here that, while Dr visits are notorious for the long patient waits, this is NOT the case at Texas Children's with these types of workups for surgeries. Pretty much everyone there is on the money with scheduling because their time is at a premium - and we have come to understand that with a hospital so big, things need to move quickly and on time for it to work. So while I would anticipate a long wait usually, it was not so in this case.

But it wasn't until 5:09 that we saw the first Resident Dr.and then 5:15 for the specialist. It did go quickly and we concluded at 5:22. It was a race to the airport at that point - one in which my old skills of controlled professional driving, cell phone google maps with real-time Traffic updates and our stylin Chrysler 200 were put to the test. We pulled into Enterprise at Hobby airport at 6:05, got dropped off by the shuttle at 6:22, breezed through TSA (seriously!) and lucked into the boarding gate being the first one in the concourse... we walked up a they finished calling all of the pre-boards to get on the plane. Whew!

In the end, everything worked out just fine...

Thanks to all at TCH yesterday - what an incredibly caring and professional group!

Well there is some sad, yet, inspiring news coming from 30 miles down the road. A young boy that we have followed, Tripp Roth, passed away over the weekend.

One of the things I think is critical for Christian's Conquest is to always remind ourselves that awareness for children with rare disease is part of our mission. Tripp and Courtney's strength and love poured out to all on the internet in a way that touched people deeply... it is what we, as parents of chronically ill children, draw from when wondering "why?".

A beautiful message posted to Tripp's blog illuminates this perfectly:

I also remember that God never asks us to do something that He himself has not done. Even to the loss of our children.

Godspeed, Tripp, and prayers for Courtney and family. 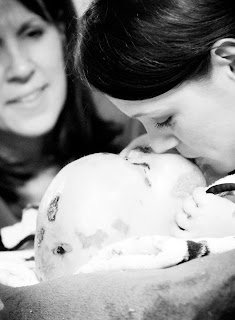 Aida and Christian left today to head to Houston for the first part of the workups for his transplant. It is hard to believe that things are really moving towards that day... what was just a pie in the sky dream/hope/prayer for the past 14 years is now becoming reality. Words fall short of describing the feelings we have today.

We got a bit of a break in scheduling and rather than having to go over on the 8th, they delayed Christian's Soliris infusion from Monday until Wednesday - so it'll be Wed: infusion and dialysis, Thurs: meetings and Dr visits, Fri: meetings and dialysis, Saturday: return home.

We will post next week with feedback on the results of the next few days. Stay tuned!

Please help spread the word on 2K for Life! - this is a grass-roots, person to person, personal campaign and it will take all of our friends and friends of friends out there to make the goal. Thanks to those who have subscribed to the $10 per month donation schedule already!

If you would prefer to help Christian with a one-time donation, this donate button is the way to go. You may enter any amount of your choice. Thank you, kindly.

Prefer not to donate online? Checks / Money Orders can be sent to: